On some days you only know what you're going to write about just as you go to do it. I woke up this morning to discover it's International Women's Day, and having spent Sunday with my mother and sisters I already had wonderful women on my mind. I'm also currently reading a book called The Little Coffee Shop of Kabul, which explores unlikely friendships between five very different women in that city. Books, women, and celebration - my kind of recipe! So I thought I would pen a little something about five women writers who have a place in my heart and in my bookcase. 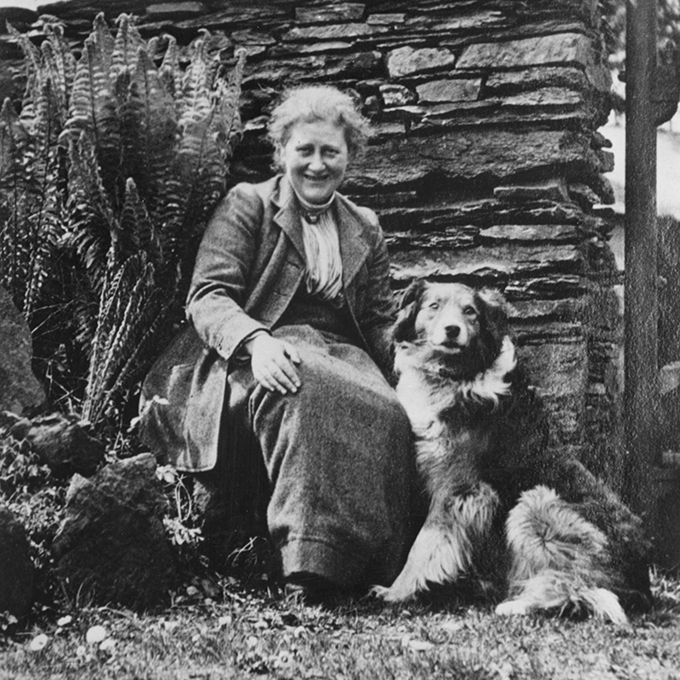 I doubt there's a person in this country who can read that hasn't heard of Beatrix Potter. The adventures of Peter Rabbit, Mrs Tiggywinkle, Jemima Puddleduck and a whole host of other vividly imagined creatures, beautifully illustrated by Potter's own sketches, delicately watercoloured, were a staple of the bed time story tradition during my childhood. Long after I could have considered myself 'too old' for these stories (I was fond of abridged Dickens by the age of 8), I was drawn to the Tales. Captured by the image of Jeremy Fisher in his macintosh and galoshes, bouncing around shaking his fingers free of stickleback spines. Horrified at Simkin the cat, as the poor Tailor of Gloucester lay ill with 'no more twist!'.

By no means much of an animal person myself, I did love Potter's characters because they were just that - such characters! I think I also loved that her writing was so different to that of other children's books I read, especially the ones my primary school assigned for reading practice. With Potter I had to work to pronounce and understand words I hadn't seen before. There was so much satisfaction in the flow of the stories, in their descriptions and the little lessons they taught. They did come out of that Victorian mindset in which children's stories were meant to teach them something, even if that something was not to steal lettuce from Mr McGregor, or pick a fight with an owl.

I had no idea until I was much older of the great part Potter played in land preservation in the Lake District. Most of the farms and other land she bought to protect from development was left to the National Trust and forms much of the Lake District National Park today.

This American author wrote the What Katy Did trilogy, and my family will readily confirm that I felt more than a little affinity with the protagonist Katy Carr, a tall, rather clumsy oldest sister in a big family who was always trying to organise the 'little ones'. Apparently Katy was based on Susan herself, who grew up the eldest child of a large family in Ohio during the 1830s and 40s.

What Katy Did was the first book I can remember reading where I felt like someone who understood me had written it. I knew I wasn't Katy - I was living in Somerset in the 1990s and not America in the 1800s - but for all those differences, here was a girl whose world I could just jump into. Teasing siblings, playground squabbles, scraped knees and broken swings; these were things any child could relate to. But Katy for me was more than that. She embodied all the struggles of growing up that I hadn't learned to articulate yet - trying to understand people, trying to be patient, grappling with how unfair life can be and what we miss out on or lose.

What Katy Did at School continued the adventure into adolescent boarding school antics, introducing the mischevious Rose Red who kicks Katy's prim approach to life into gear. Frozen toothbrushes, sliding down bannisters, and the scandal of sending notes on the end of a string to the local boys' school are all a bit much for the heroine who seems to have dropped her tomboyishness by this book, but I did love it anyway, if only because it was an adventure I could easily imagine having. And, to be fair, I was a bit of a prig myself at that time in life... What Katy Did Next was the perfect transition from teen years into adulthood, with the glorious European tour enriching my imagination with the romance of Naples, masked festival-goers throwing lime confetti, and girls writing letters on the beach.

Coolidge wrote many more books and a lot of poetry but I haven't gone looking for it, partly because I don't really want the Katy spell to be broken. I recently read that she served as a nurse during the American Civil War, and I wonder whether she knew the next author on my list...

If you haven't cried over the ending of the 1994 film adaptation of Little Women, seeing (pre-shoplifting) Winona Ryder in the rain with her German lover, please go watch it and then come back and tell me what you think. It's rare for me to love a film of a book I already adored, but it's just beautiful. Of course it's not a perfect replication of the novel, but I always felt like it captured the spirit of its characters.

Alcott grew up in the same kind of scenario as Susan Coolidge, part of a big family in mid-1800s America. They might have known each other as adults as Alcott edited one of Coolidge's books, and Alcott also served as a nurse in the American Civil War, until she contracted typhoid. She was an abolitionist and a feminist, and was quoted as saying she identified most with Jo out of the sisters in the Little Women books that she wrote: headstrong, creative, passionate and a bit out of sync with the expectations of the day.

As I had with Katy, I found a kindred spirit of sorts in Jo: less in the hair-burning, glove-staining, dress-tearing tomboy and more in the story-teller, the avid scribbler, the cryer-over-tragedies. Reading about the four sisters was like constructing a human puzzle. it was as if they all embodied different virtues and vices, wrapped into one family unit that was always trying to better itself in character even when they couldn't better their circumstances. Mrs March's advice to her daughters resonated with the kind of advice my mother gave me, and I came to love all of the sisters in different ways through the three novels.

Jo was always my favourite. I don't know if I would have felt so strongly at such a young age that I wanted to be a writer, if it hadn't been for her. In Jo, Alcott created a character that represented what she herself seemed to stand for: equality, freedom of speech, the idea that a woman could make her own way in the world and not have to adhere to social niceties that men weren't bound by.

Woolf was a departure from the women whose novels I had read growing up. I'd never read anything by a woman that dealt with the darker complexities of being human in the way that she did. To me, Woolf had affinities with Joseph Conrad and D H Lawrence, writing about people in a way that exposed the animal inside them. Her writing was so compelling, immersive, as though the reader could think the thoughts of her characters and feel their feelings. It didn't have the distance of so many novels, where those thoughts and feelings are described by the all-knowing narrator in a way that limits our understanding of them. Woolf's characters were wide open to interpretation, and the world they inhabited was often another character all of its own, interacting with them.

I loved Woolf so much that in my final year studying at University I made her the subject of a dissertation, and even after the agony of poring over so many books and trying to draw together some common threads, I wasn't tired of her work. The passage of time in To the Lighthouse, the interior monologues of Mrs Dalloway, the symbolism of The Voyage Out all fascinated me in equal measure. She always seemed to have a degree of understanding of humanity that outstripped so much I have read, and her novels contain such insightful commentary on the modern sense of self and how we construct our identity.

Woolf suffered with depression throughout her life following the death of her mother when she was 13. She sometimes expressed that writing was one of the things which allowed her a sense of control. In her essay A Room of One's Own she wrote: 'lock up your libraries if you like; but there is no gate, no lock, no bolt that you can set upon the freedom of my mind.'

Anita Desai grew up in India, speaking five languages and publishing her first story in English when she was only 9. She studied at the University of Delhi in the late 1950s, and the Old Delhi in which she grew up would be the setting for my favourite of her novels, Clear Light of Day.

I have always been drawn to stories that centre around families, I think. There's something about the unbreakable bond a family shares and the complexity of relationships that allows me to connect emotionally. When I read Clear Light of Day I was researching how writers from different countries use the English language, how language can be moulded around the culture and events it is being used to portray. In Desai's portrayal of the gradual growing apart of a family through and after the partition of India, I found an imagery that was unfamiliar and enthralling.

Desai's novel made a strong contrast of Old Delhi and New Delhi, and her characters are so keen to escape the old that it is portrayed as stagnating and falling apart, while New Delhi represents something fresh and modern. I was fascinated by the way she made it seem as if the city wasn't just a backdrop but a living, breathing organism. Every setting had a part to play, in symbolism or memory, for the characters to explore their past and present. I wrote a poem (here) inspired by the book and specifically the relationship between the two sisters that it portrayed.

So there are 5 women writers I love! Happy International Women's Day, all - may we celebrate the women who have made an impact on our lives and the world.